General Assembly of the DBMB and Elections in Weihenstephan 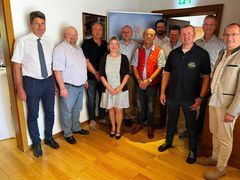 Due to the general assembly being postponed because of the Corona virus, chairman Martin Zuber reported on the past 4 years in front of ca. 50 attending members of the DBMB. Over the course of the assembly at the Bräustüberl Weihenstephan the elections for the chairman and the advisory board were held. With Markus Milkreiter and Arno Jacobi leaving the board the new voted members are brewmaster Josef Lechner (Schneider Weiße), Martin Neubert (Habla Chemie) and Tobias Zollo (Staatsbrauerei Weihenstephan). Ortwin Niller in his role as the treasurer reported on the financial situations and changes to the statues were agreed on unanimously. The Südbayern section is on the way of steadily growing despite the general trend. Walter König presented the new regulations for apprenticeships as brewers and maltsters and the honorary president, Peter Düll, who has significantly shaped the system for apprentices in the 1960s held a joyous discourse about the cleaning of wooden casks to round off the official assembly.

Special thanks go to the Staatsbrauerei Weihenstephan and Prof. Josef Schrädler, represented by brewmaster Tobias Zollo for sponsoring drinks during the assembly as well as in the beergarden afterwards.


Frozen bottom-fermenting yeast – the format of the future


General Assembly of the DBMB and Elections in Weihenstephan


Farewell to Karl-Heinz Bromig. Thank you!


Journal of the Institute of Brewing and Distilling